Crystal devices are electronic components that control and select frequencies with high accuracy and stability.
When a substance attaches to the electrode of the crystal sensor surface, a frequency drop corresponding to the mass adsorbed appears(=Mass load effect), so it is also used as a sensor and is generally called as QCM sensor.
Additionally, the mass load effect using the QCM sensor is called as QCM method.
QTGA method measures outgas amount adsorbed by the QCM method and identifies the substance from the adsorption/desorption characteristics by controlling the sensor temperature.
In the field of outgas measurement from materials for space equipment, this QTGA method has been used. for a long time.

Mass load effect
When a substance attaches to the electrode on the surface of the crystal sensor, the frequency corresponds to its mass decreases.

A relational expression between mass and frequency

Sauerbrey equation for the relation between masses and frequencies has been known.
【Sauerbrey's equation】
Sauerbrey's equation is often used as a function of mass/frequency in applications such as uniform and rigid thin films.
For example, when calculating a certain mass amount and thin film thickness in vacuum deposition.,the equation is used.
According to sauerbrey equation, the mass-equivalent per Hz frequency variation is about 4.18 ng per cm2 with 10MHz crystal sensor. 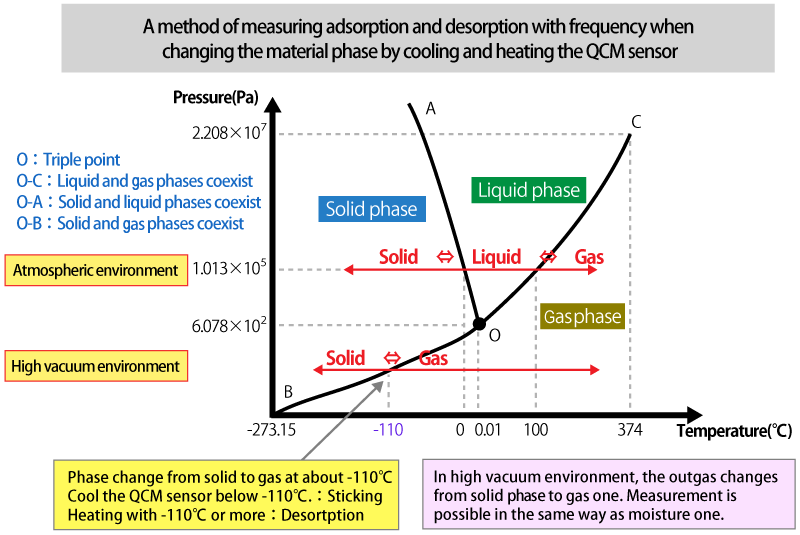